Two Scoops of Work Life with Some Hot Feminism Sauce

I, previously, wrote a blog post titled “A cup of sex with a scoop of feminism,” about gender bias when it comes to virginity and sexual desires. If you ask me, “Is this going to be a series of feminism posts?” My frank answer would be, “I don’t know.” So, as of now, let’s keep it as just another post. I am a lucky person; yes, I am really a lucky person. I was brought by my feminist mom, with ample amount of independence. I work in a place, where men are chivalrous, and timings are flexible. People who know these things about me ask, “Then, why do you even talk about feminism? In your shoes, you are already enjoying being a female.” Well, I don’t deny it, but it is not just about me. It is about every single female out there; hence, this post. 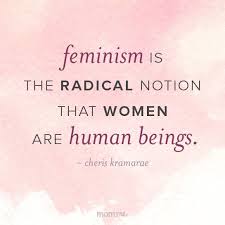 I take a MTC bus from home to work, and back. I start early to work, at around 7-ish. Since it is a pleasant and not so crowded timing, there wouldn’t be many people in the bus stop. For past couple of months, I noticed two ladies, who stand along with me in the bus stop, and at times, we board on the same bus. Although I haven’t had any communication with them apart from a customary smile and glance, I could guess from their looks and talks (I wasn’t eavesdropping, they were loud!) that they are middle class working women from joint family background.

Today, one of the ladies weren’t there, and the other lady asked me to sit next to her as it was the only available place. What started as an introduction kind of turned out into a full-fledged rant by her (no complaints!). The gist of what she ranted is: She is a working women who works as a sales representative in a company near Guindy. She travels almost 20 kms to and 20 kms fro from her home to this office. If that is not enough, she also has a kid and husband’s family to take care. Her daily life routine is to get up, do all the household chores, go to office, work for 11 hours, travel back, and do household chores again. Firstly, they can’t afford for a maid. Secondly, her husband doesn’t like his mom or dad to stress with any responsibility (fair enough, but helping the woman of the house is not a tough task… psst!). Finally, she got fired from her job, and the reason stated was that they wanted a salesman as men can roam and sell a lot than women (again, generally accepted).

As we spoke furthermore, I came to know that she had worked previously in a mall in Chennai as a security women, where she needs to stand for 12 hours straight. She said how irritating that job was as she can’t take loo breaks as often as required, or eat lunch on time. She had to quit that job, when her husband started to visit the mall in the weekends, and started to spy on her. She was almost in tears, when she said that she couldn’t talk or smile properly to anyone as her husband might be staring from any corner of the big mall. Thus, she ended up quitting the job, and taking up this sales job. However, with this job too being out of hand, she is searching for a new one currently.

What was the problem here? Well, being the feminist I am, one would expect me to blame her husband or the boss who fired her. But, no, they are not entirely responsible. Although the boss is responsible for firing her with very less notice period and her husband for not helping her in household chores and doing moral policing on her, the other 50% of the blame lies on her. Yes, half the problem unfolds when women don’t speak up; if they don’t, they are going to be suppressed. Also, a couple of days back, I had a discussion with a friend of mine. He told how men and women can never be equal. He gave a similar example of how women can multitask, and men can do physical work easily, while the vice-versa is not possible, generally. While one can argue that this is stereotyping and gender policing, on a general level, this is the fact. The fact that led to firing of that lady, the fact that led her husband suspect her, the fact that made her life miserable. I don’t know if I could help her or anyone in anyway, but I would be glad if women all around, educated or uneducated; rich or poor; young or old, get to speak out their problems and stand up for themselves. Down the line, I might start an NGO, but as of now, here are few lessons I learnt from this incident:

Read my other life lessons here.