A Cup Of Sex With a Scoop of Feminism 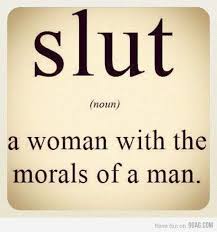 “I like her,” he said. “Hmmm…,” she said taking a puff from the cigarette he passed onto her. “Do you think I should propose to her?” he asked as he casually caressed her neck. “Depends, do you really love her?” she asked still uninterested in the conversation. He nudged her to be more serious. “Okay, you would like to propose her for marriage. Well, in that case, do you think she is really compatible for you?” she asked looking straight into his eyes. “I don’t know. She is not this bitchy, flirty kind that hangs out with guys. So, may be…” his voice trailed and he then uttered, “may be, she is the one who is good for marriage, unlike the other girls.”

Bitchy, flirty, and what not – women who flirts around with guys are considered bitchy and slutty, while the ones that are reserved about their sexual feelings are considered to be good for marriages. Well, if you think that this is the basic norm of life, then take a minute, and think if this is the same rule for guys? A guy who had multiple girlfriends, affairs, or one-night stands is considered to be a macho, mostly. However, if a girl has slept with someone even once before her wedding she is considered as a slut, whore, or bitch, mostly. Also, is virginity status the only criteria for a girl to enter wedlock?

Many seem to argue that women who had trust about getting married to the love of their life and hence lost their virginity but in the end broke up with their guys are to be spared from this slut shaming. I, on the contrary, feel that every woman should be treated equally irrespective of their sexual life or virginity status. The above said example is one that clearly depicts my point. It is not necessary that the girl who the guy was talking to should be the love of his life, but who gave him the right to address such girls as slutty or bitchy? If she is at the evil end, then even he deserves to be the same. If she is not the one who is good for marriage, then the same holds for the guy too.

Well, even the movies seem to blindly follow the stereotype. Here are certain examples. In “Cocktail”, a Bollywood movie, the male protagonist lives in with the female protagonist, both of them would have had multiple affairs before. However, when it comes to marriage, he prefers a girl who is a virgin, saintly, and reserved. While, the preference to love is an individual’s personal choice, my trouble here is why did the film makers end the story with the flamboyant female protagonist getting “reformed”. Dude, she wasn’t a murderer, psychopath, serial killer, or drug addict to get reformed.

Another epic example is the Tamil movie “Theeratha vilayatu pillai”, where the hero flirts around with three girls at the same time, discreetly, and tries to pick one among those three. This film was widely accepted and appreciated by most of the audience, including women. However, another Tamil movie “Vinnaithandi Varvaya,” released around the same time had a plot wherein the girl initially reluctant to fall in love, falls for the guy later on, and at some point, breaks up with him and marries a person of her parents’ choice. While the movie was nicely made from the director’s side, I have seen so many comments from the audience on the social media stating “How bitchy the female protagonist was to love a guy, make love to him, and finally leave him to marry someone else.”

While these are the filmy examples and audience’s reaction to it, one of the real life scenarios that I witnessed is as follows. A lady friend of mine, who is 10 years elder to me, married, and mother of a kid, had found that her husband had an affair. While she chose to leave him, after innumerable pleas from his side, she got back with him. However, once when she got dropped at her house by her male colleague after her car broke down, the husband started suspecting her and abused her physically. Loyalty in a relationship is very important, but shouldn’t it be from both the sides? Also, outside the whole concept of love, marriages, and relationships isn’t sexual drive and feelings supposedly be present for both the sexes?

While men could fancy S&M, pole dance, strip tease, etc. as their fetishes from their sex partners or significant others, aren’t a girl supposed to have fetishes? In majority of the cases, men are comfortable with a wild cat, flamboyant, and sexually talented girl as their sexual companion, friends with benefits, one-night stands, or girlfriends. However, when it comes to fiancée or wife, why is it that most of them need a ‘pure’ girl?

One thing which confuses me is that: “Is a girl not supposed to have sexual feelings like how a guy does? Is it a crime for a girl to have sex before wedlock? Is it offensive if a girl asks for a different fetish of hers to be satisfied from her husband? Is it a no-no for a girl to watch porn? Finally, is it okay for a guy to have an affair and not for a girl to?” If that is the norm, then please do let me know as many girls (including me) need to get a medical test done to stop our urges *licks the sarcasm dripping from the mouth*